Dazzling gemstones, elaborate enameling and extravagant design for jewelry and bejeweled objects were an integral part of the Mughal rulers’ opulent courts as jewelry and simple everyday items were elevated to the extraordinary.

Maharajas & Mughal Magnificence, a landmark auction that takes place at Christie’s New York on June 19, 2019, presents a remarkable collection of jewelry, gemstones and decorative objects that explore the creative dialogue between India and the West.

The Mughal empire started in 1526 with the last Mughal emperors ousted from power by the British in 1858. The Mughals had a rich artistic tradition that combined elements from Persia, India and Renaissance European styles and themes. The 388-lot sale spans a period of 500 years, showcasing the celebrated culture of Indian jeweled arts from the Mughal period to the age of the Maharajas through the present day. Also highlighted in the sale are a selection of important 20th-century pieces from Bulgari, Cartier, Janesich, Lacloche, Linzeler, Mauboussin and Mellerio, as well as contemporary jewels from JAR and Bhagat.

“This landmark collection traces the history of Mughal jewels and objects to present day and represents the most significant collection of its type ever to come to auction,” notes François Curiel, chairman, Christie’s Europe. “The collection begins in Mughal India, the most important dynasty that ruled the country, famous for its emeralds, diamonds, sapphires, rubies, jeweled weapons and objects that are jeweled beyond belief.” One of the highlights of the sale is The Arcot II, a 17.21-carat, pear-shaped, D, internally flawless, type IIa diamond. It was one of five diamonds gifted to Queen Charlotte, the wife of King George III, in 1777 by Muhammad Ali Wallajah, Nawab of Arcot. Two of the diamonds were set into a necklace, which was meant to be sold with her other jewelry and the proceeds split between her children. However, her son, George IV, decided after his father’s death that all of the property of his parents — including his mother’s jewelry — should go to him rather than the crown. He took the diamonds and set them in a crown for himself. The diamonds were later remounted in a crown for Queen Adelaide, wife of his successor, King William IV. The Arcot diamonds were eventually auctioned off and purchased by the first Marquess of Westminster as a gift for his wife. The stones remained in the family for many years and the gems were at some point set by jewelry house Lacloche, in what became known as the Westminster tiara. In 1959 the third marquess put the rocks up for auction and they were scooped up by none other than the king of diamonds himself, Harry Winston. Winston recut the stones to obtain a better quality and then mounted them in rings, both of which sold to his clients, who were American.

“The Arcot II is the ideal combination of Golconda perfection with Royal and Noble provenance along with perfect color, flawless clarity and a charming cut,” notes Rahul Kadakia, international head of jewelry, Christie’s. 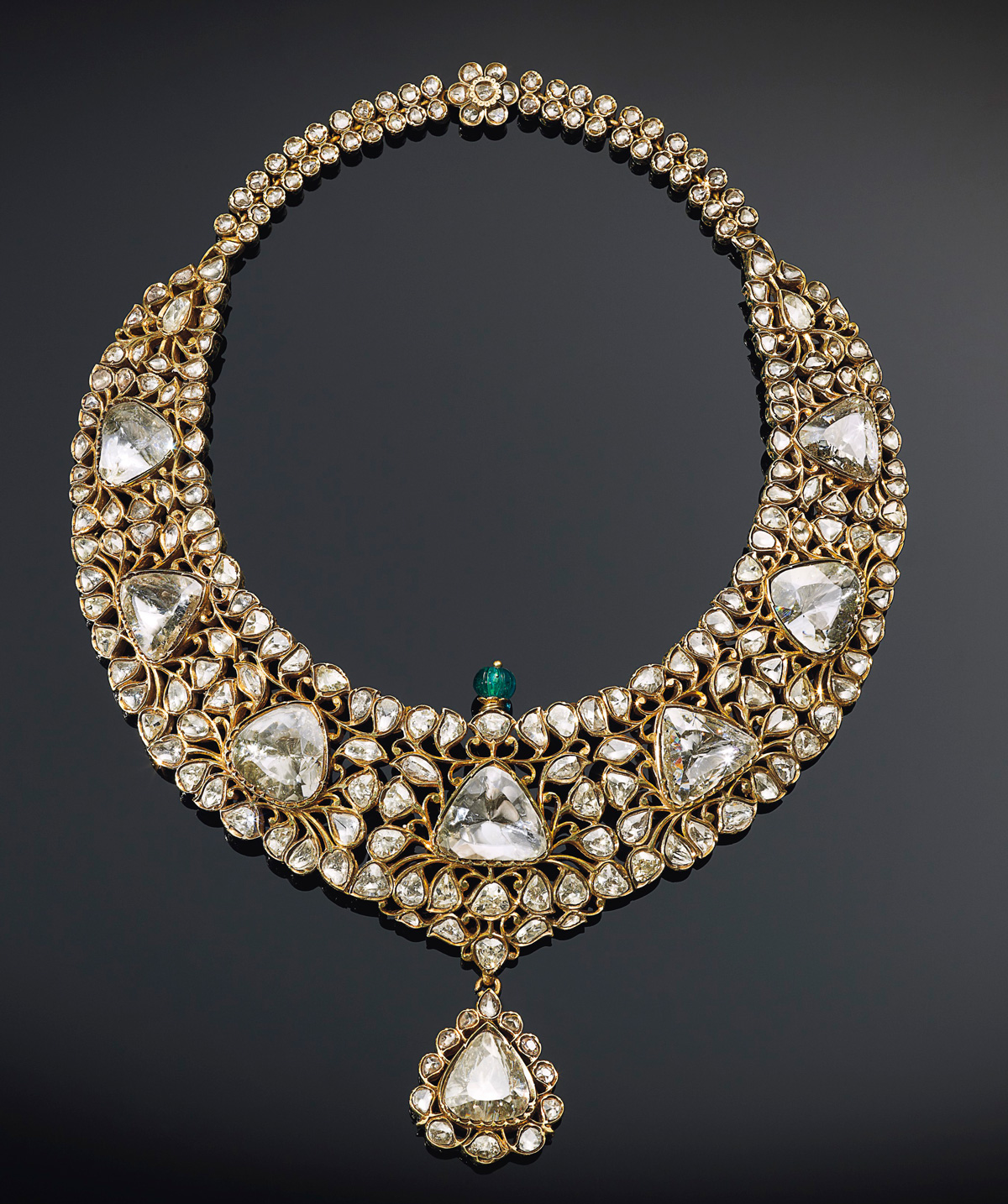 Also impressive is a diamond rivière necklace featuring close to 200 carats of Golconda diamonds. The necklace was formerly in the collection of the Nizam of Hyderabad, circa 1890. The diamonds are all large, with the biggest weighing in at 24.38 carats. Despite its size, it is surprisingly wearable, if one has the occasion and wants to wear it (who wouldn’t).

A second necklace, also from the Nizam of Hyderabad, circa 1859, is a spectacular collar of diamonds and gold that is breathtaking. One of the characteristics of Mughal jewelry that makes it so special is that often the back, or inside, of the piece is a gorgeous as the front, made so by intricate enamel work or engraving. When this particular necklace is turned over, the back is lavishly engraved with a foliate motif that is equally as beautiful as the front. Notable is a diamond and enamel peacock aigrette  (a headdress ornament) made by the French design house, Mellerio dits Meller. Fascinated by the peacock motif, a bird that is greatly revered in India, the Maharaja Jagatjit Singh of Kapurthala bought the aigrette during a trip to Paris in 1905. The aigrette proved lucky for the Maharaja, as he met his fifth wife, flamenco dancer Anita Delgado, while wearing it in his turban. The peacock was later worn by Delgado.

The sale also encompasses incredibly bejeweled and embellished everyday items, such as a diamond, ruby, emerald and enamel fly whisk, a jeweled inkwell and pen case, jewel-encrusted swords and daggers and numerous other everyday objects that have been turned into works of art.

The items offered in the auction are from The AI Thani Collection, which is comprised of some 6,000 pieces. Proceeds from the sale will go to new acquisitions and will also support ongoing initiatives for The AI Thani Collection Foundation, which include exhibitions, publications, lectures and sponsorships of projects at museums worldwide. Starting next year works of art from the collection will be on display at a new museum space in Paris.

According to a press release from Christie’s, this collection is primed to be the most valuable auction of jewelry and jeweled objects, surpassing the current record set by the Collection of Elizabeth Taylor, which totaled $144 million.

“From exceptional daggers worn by the elite nobles and royal families of India to important jewels inspired by Indian tradition and architecture, the auction of this notable collection presents a truly significant cultural moment and offers a milestone opportunity for collectors,” concludes Curiel.